This blog post contains information about the web site. It’s mostly for my reference, but since I benefited from countless online resources while wrestling with the configuration, I thought I would post it to return the favor.

Web hosting is provided by Digital Ocean. I chose Ubuntu for my OS. The domain name is registered through Hover. Digital Ocean has beaucoup tutorials. These were the ones that I ended up using:

As much of the content as possible is written in Markdown. I make changes to the content, generate the website with Hugo, and then upload the newly-created /public directory to the server via SFTP.

Normal (static) figures on the home page are saved as JPG. They have a resolution of 360 x 202px. No reason, that’s just what happened to work for this layout.

I used an animated figure instead of a movie because it takes up much less space. Steps:

The -framerate 2 gives 2 frames per second. Adjust to taste. The %d.jpg means to include all of my figures named 1.jpg, 2.jpg, and so on. If you name your files image1.jpg, image2.jpg, then you would use image%d.jpg. I scaled the images using the -vf scale=360x202 option. The last item, out.gif, is the output file name of the animated gif. I adapted a stackoverflow answer to get what I needed.

The figures on the home page show text if you hover the cursor over them. This effect is pure CSS. I adapted the code from the “Image Cover Overlay” tutorial at W3Schools.

Icons are provided by Font Awesome. Setup is straightforward. Enter your email address and Font Awesome will send you a custom <script> element to put in your <head>. Then, you just reference the fonts in your html. For example:

Here is a lightbulb:

Hugo automatically includes the appropriate <script> information in the final HTML when the document is compiled. How does Hugo know what to do? I inserted the following code into the partial layout header file:

Now I can render math properly. Type \\(y=e^x\\) to get \(y=e^x\). Note that inline equations require the delimeters \\( and \\). I suspect this is due to Blackfriday, the default markdown engine for Hugo. Displayed equations will work without any chicanery using the $$ delimiters, so type $$y=e^x$$ to get

If you need to figure out how to enable a MathJax flag on Jekyll, check out Eddie Smith’s blog post. 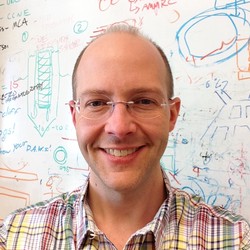